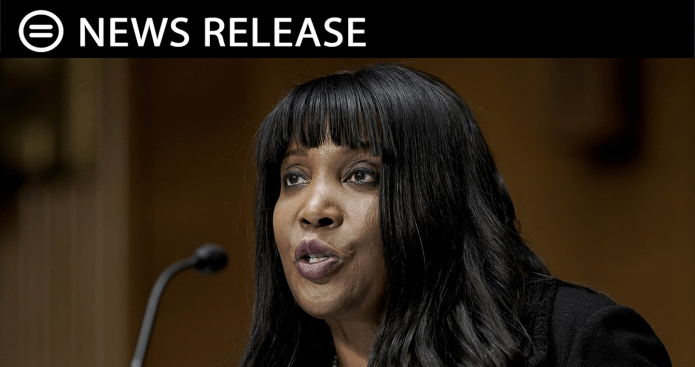 National Urban League President and CEO Marc H. Morial released the following statement after the U.S. Senate confirmed Dr. Lisa Cook to the Board of Governors of the Federal Reserve System (the Fed), making her the first Black woman and the fourth African American in the Fed’s 108-year history to serve in this role. Dr. Cook’s nomination was confirmed by a vote of 51-50, with Vice President Kamala Harris – who holds the unique and historic role as the first Black woman in U.S. history to serve as Vice President – placing the tie-breaking final vote:

“Previously a tenured professor of economics and international relations at Michigan State University, Dr. Cook has long been one of the most accomplished and internationally recognized macroeconomists. She has a proven track record of advocating for more equitable participation of women and African Americans to boost the nation’s economic potential and reduce inequality and will bring a wealth of knowledge and insight on banking systems, innovation, markets, and global finance as a Fed Board Governor.

“Dr. Cook is a native of Milledgeville, Georgia, holds bachelors’ degrees from Spelman College and Oxford University, and a Ph.D. in Economics from the University of California, Berkeley. She has served on the faculty of Harvard University’s Kennedy School of Government and held senior positions across the federal government, including the U.S. Department of Treasury, and most recently at the White House Council of Economic Advisers.”

“Dr. Cook’s background and experience have made her uniquely qualified to serve in her new role. In addition, she has the character, integrity, and lived experience to ensure the Fed Board Governor represents all Americans, including communities of color. For these reasons, the National Urban League worked vigorously to advance Dr. Cook’s candidacy to this important post.

“We commend President Biden and the U.S. Senators that voted in favor of Dr. Cook’s confirmation for their commitment to ensuring that leadership at the highest levels of our nation’s central bank reflects the rich diversity of this nation. We’d also like to thank U.S. Senator Sherrod Brown, Chairman of the Senate Banking Committee, for his dedication to Dr. Cook’s historic nomination and his defense of her in the face of, sometimes, partisan, and biased attacks.

“The Federal Reserve is now one step closer to having the leadership it needs to adequately fulfill its critical mission as our nation continues to recover from the economic challenges posed by the COVID-19 pandemic. We look forward now to the confirmation of Jerome Powell to his second term as Fed Chair and the confirmation of Dr. Phillip Jefferson as a governor. We encourage the Senate to move swiftly.”