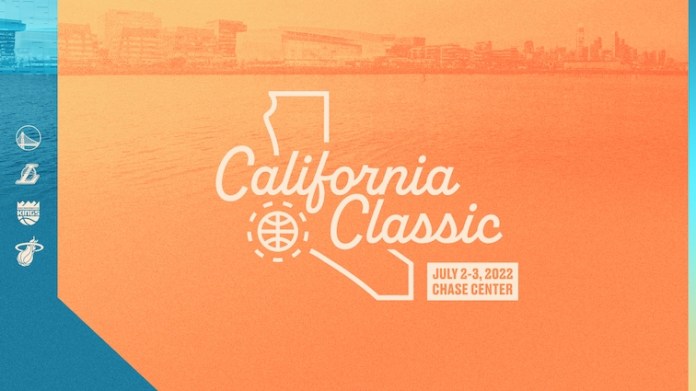 The Warriors will host the fourth annual California Classic at Chase Center on July 2-3 along with the Lakers, Heat and Kings.CVV News-Posted: June 27, 2022

The Golden State Warriors will host the fourth annual California Classic at Chase Center on July 2-3, the team announced today. The Warriors, Los Angeles Lakers, Miami Heat and Sacramento Kings will compete in four games over the two-day event.

The California Classic showcases rookies selected in the 2022 NBA Draft competing in their first NBA games, along with sophomores, select free agents and other players competing to make NBA and NBA G League regular season rosters. The California Classic began in 2018 and has been hosted by the Sacramento Kings at Golden 1 Center in each of its previous three years.

Two-day passes will be available for purchase at warriors.com beginning on Tuesday, May 17, at 10 a.m. PDT for Warriors Season Ticket Members, 12 p.m. for members of the Dub Club, 2 p.m. for Insiders and 4 p.m. for the general public.

Radio and television broadcast information for the 2022 California Classic Summer League will be announced at a later date. The Warriors will also participate in the NBA’s annual Las Vegas Summer League later in July.

For more information on the 2022 California Classic visit warriors.com/california-classic.

centralvalleyvoicehttps://centralvalleyvoice.com
Felicia Roberts took an idea gathered a few people to reached into a minority community to highlight the positive, using a minority newspaper the Central Valley Voice. Roberts was joined by her sisters Carolyn Williams, Alleashia Thomas, niece Hermonie Lynn Williams, nephew Ron Williams, cousin Jerald Lester, Jay Slaffey, Greg Savage, Tim Daniels and the late J Denise Fontaine. Each individual played an important role in the birth of the newspapers. Since, then many have stood strong behind the success of the newspapers and its goal to fill a void in the Central Valley community. The Central Valley Voice published their 1st issue in November 1991. Its purposed was to highlight the achievements of minorities in the Central Valley. The Voice focuses on the accomplishments of African Americans and Hispanics giving young people role models while diminishing the stereotypical pictures of gangs, crime and violence that permeate the minority communities. Since 1991, the Central Valley Voice has provided an important voice for the minority community throughout the Madera, Merced. Stanislaus and San Joaquin counties.
RELATED ARTICLES
Pro Sports