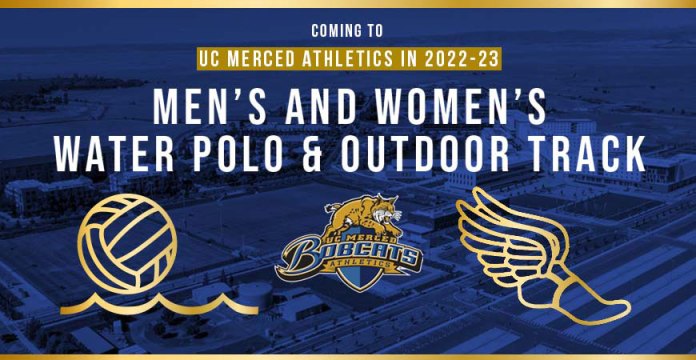 “We are excited to be able grow our programs as our campus continues to grow,” Executive Director of Recreation & Athletics David Dunham said. “Water polo has a rich history in the Central Valley and will be a great addition to our campus.”

UC Merced last added varsity programs in 2013-14 with the introduction of men’s soccer and men’s volleyball. Since then, UC Merced Athletics has gone through substantial growth with new facilities such as Bobcat Field and the Aquatics Center.

Water polo, which will be elevated from a UC Merced sports club team and is one of the fastest-growing sports in America, will call the Aquatics Center home and compete in the Collegiate Water Polo Association. Men’s water polo will play in the fall and the women’s water polo team will begin competition in the spring.

Head cross country coach Vicente Velarde will lead the outdoor track program. Velarde has led his men’s and women’s cross country teams to runner-up finishes in the California Pacific Conference each of the last two years and has qualified 13 individuals for the NAIA National Championships.

The track program aims to focus on distance track at the start while competing as a member of the Cal Pac in the NAIA. The inaugural Cal Pac Track & Field Championship was held this past April. Embry-Riddle Aeronautical University claimed both the men’s and women’s team titles.

“I look forward to working with coach Velarde as he builds our track program,” Dunham said. “There is great synergy between cross country and track. We have had success in our cross country program for many years and look to build upon that solid cross country foundation while building a competitive track program.”

“We couldn’t be more excited or grateful for the addition of track,” Velarde said. “I was pleasantly surprised we added it for this upcoming year, but it has been something the team and I have wanted for a while now. This allows us to have more measurable goals in the spring semester, when in the past, we would typically focus on areas we could grow for cross country. It also opens the possibility of competing for a Cal Pac championship and qualifying for the national meet.”

“His time of 14:38 ended up winning the national meet as well. Sow hen I see our runners accomplishing things like that and now we know there are possibilities of them becoming All-Americans or getting those experiences to enter the national championships, it has me excited to see them enjoy the rewards of their hard work,” he said. “More than anything, I’m excited to lead this program and set a foundation that we can be proud of in our first season.”

Track season will begin in spring 2023.

centralvalleyvoicehttps://centralvalleyvoice.com
Felicia Roberts took an idea gathered a few people to reached into a minority community to highlight the positive, using a minority newspaper the Central Valley Voice. Roberts was joined by her sisters Carolyn Williams, Alleashia Thomas, niece Hermonie Lynn Williams, nephew Ron Williams, cousin Jerald Lester, Jay Slaffey, Greg Savage, Tim Daniels and the late J Denise Fontaine. Each individual played an important role in the birth of the newspapers. Since, then many have stood strong behind the success of the newspapers and its goal to fill a void in the Central Valley community. The Central Valley Voice published their 1st issue in November 1991. Its purposed was to highlight the achievements of minorities in the Central Valley. The Voice focuses on the accomplishments of African Americans and Hispanics giving young people role models while diminishing the stereotypical pictures of gangs, crime and violence that permeate the minority communities. Since 1991, the Central Valley Voice has provided an important voice for the minority community throughout the Madera, Merced. Stanislaus and San Joaquin counties.
RELATED ARTICLES
Sports