Take a look at the complete regular-season schedule for all 30 teams. 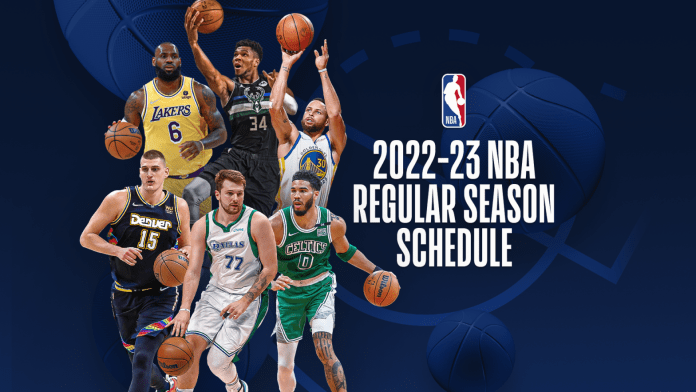 The NBA has released its full schedule for the 2022-23 season.

NEW YORK – The NBA today released its complete game schedule and broadcast schedules for TNT, ESPN, ABC, NBA TV and ESPN Radio for the 2022-23 regular season.  The complete schedule and team-by-team schedules are attached and available at NBA.com/schedule.

The first four days of the 2022-23 NBA regular season (Oct. 18-21) will feature eight national television games as part of Kia NBA Tip-Off 2022, with TNT and ESPN airing two doubleheaders each.  Those games will showcase 12 different teams, three rematches from the 2022 NBA Playoffs and rosters that currently include 15 NBA All-Star selections from last season and seven recipients of the Kia NBA Most Valuable Player Award.

ESPN will tip off its 21st straight year of NBA coverage on Wednesday, Oct. 19 with a doubleheader, which begins with the Memphis Grizzlies hosting the New York Knicks (7:30 p.m. ET).  The second game will be a rematch of a 2022 Western Conference Semifinals series, with the Dallas Mavericks visiting the Phoenix Suns (10 p.m. ET).

On Thursday, Oct. 20, TNT will present its second doubleheader of opening week as the 76ers host the Milwaukee Bucks (7:30 p.m. ET) and the Lakers meet the LA Clippers (10 p.m. ET).  ESPN’s doubleheader on Friday, Oct. 21 will have the Celtics visiting the Miami Heat (7:30 p.m. ET) and the Denver Nuggets facing the Warriors in San Francisco (10 p.m. ET) – rematches from the 2022 Eastern Conference Finals and 2022 Western Conference First Round, respectively.

NBA TV will tip off its live game coverage for the 2022-23 season on Saturday, Oct. 22 with a doubleheader as the San Antonio Spurs visit the 76ers (6 p.m. ET) and the Mavericks host the Grizzlies (8:30 p.m. ET).  The national television schedule for the first week of the season will conclude on Sunday, Oct. 23 when the Suns visit the Clippers on NBA TV (10 p.m. ET).

Christmas Day
Five games will be played on Christmas Day (Sunday, Dec. 25) for the 15th year in a row, with ESPN or ABC televising each matchup.  The 75th edition of the NBA on Christmas Day will tip off on ESPN as the Knicks host the 76ers (noon ET).

The next three games will air on both ESPN and ABC, with the Lakers visiting the Mavericks (2:30 p.m. ET), the Celtics hosting the Bucks in a 2022 Eastern Conference Semifinals rematch (5 p.m. ET), and the Grizzlies making their Christmas Day debut when they visit the Warriors in a 2022 Western Conference Semifinals rematch (8 p.m. ET).  The Christmas Day schedule will conclude with the Nuggets meeting the Suns in Denver on ESPN (10:30 p.m. ET).

TNT will present a doubleheader as part of Martin Luther King Jr. Day on Monday, Jan. 16.  In the first game, the Atlanta Hawks will host the Heat in a rematch of a 2022 Eastern Conference First Round series (3:30 p.m. ET).  In the second game, the teams with the two best records in the 2021-22 regular season will meet when the Suns (NBA-best 64-18 last season) visit the Grizzlies (56-26 last season) at 6 p.m. ET, marking Memphis’ 21st annual Martin Luther King Jr. Day Celebration Game.

As Election Day approaches, the NBA and its teams will continue to encourage fans to make a plan to vote and participate in the civic process.  New this season, all 30 teams will play on Monday, Nov. 7 on the day before Election Day, when the NBA will help promote voter participation, share important resources from voting organizations and highlight the civic engagement work of teams in their markets.  As part of this initiative, no NBA games have been scheduled for Election Day on Tuesday, Nov. 8.

Classic and budding rivalries between teams and players will take center stage for NBA Rivals Week during the week of Jan. 23.  A new highlight of the regular-season schedule, NBA Rivals Week will feature 11 nationally televised games across four networks over five days from Tuesday, Jan. 24 – Saturday, Jan. 28.  Rivalries will be the focus of all nine games across TNT, ESPN and ABC that week, in addition to two games on NBA TV.

NBA Rivals Week will showcase a tripleheader on ABC on Jan. 28, concluding with the Lakers visiting the Celtics as the two teams that share the record for most NBA championships (17) and have met in the NBA Finals the most times (12) renew their rivalry in Boston (8:30 p.m. ET).  Earlier in the day on ABC, two-time reigning Kia NBA Most Valuable Player Nikola Jokić will lead the Nuggets against back-to-back MVP runner-up and 2021-22 NBA scoring leader Joel Embiid and the 76ers (3 p.m. ET), followed by an intracity matchup between New York and the Brooklyn Nets at Barclays Center (5:30 p.m. ET).

The complete game and broadcast schedule for NBA Rivals Week, which will include four rematches from the 2022 NBA Playoffs, is available here.

The 2022-23 season will feature the return of NBA Global Games with two regular-season games outside the U.S. and Canada, both televised by NBA TV.  The NBA Mexico City Game 2022 will see the Heat face the Spurs on Saturday, Dec. 17 at the Arena CDMX in Mexico City (5 p.m. ET).  The NBA Paris Game 2023 will feature a matchup between the Chicago Bulls and the Detroit Pistons on Thursday, Jan. 19 at the Accor Arena in Paris (3 p.m. ET).

The Warriors and Celtics will meet for the first time since the 2022 NBA Finals on Saturday, Dec. 10 in San Francisco on ABC (8:30 p.m. ET).  This will mark the season premiere of NBA Saturday Primetime on ABC, the first of seven regular-season games on Saturday nights at 8:30 p.m. ET on ABC.

The second and final regular-season matchup between the two defending conference champions will take place on Thursday, Jan. 19 in Boston on TNT (7:30 p.m. ET).

Final Day of Regular Season
All 30 teams will play on the final day of the regular season (Sunday, April 9).  The seven games between Eastern Conference teams and the one interconference game (Rockets at Washington Wizards) will begin at 1 p.m. ET, and the seven games between Western Conference teams will start at 3:30 p.m. ET.  ESPN will televise a doubleheader, with the matchups to be determined at a later date.

Additional Schedule Highlights
All 30 teams are scheduled to make at least one appearance on TNT or ESPN in the 2022-23 regular season.  The NBA on TNT, ESPN, ABC and NBA TV will present flexible scheduling throughout the regular season to provide the most compelling matchups to a national audience.

ESPN Radio will broadcast 25 games in the regular season, including Lakers vs. Warriors on opening night, Bucks vs. Celtics and Grizzlies vs. Warriors on Christmas Day, and Heat vs. Hawks on Martin Luther King Jr. Day.  It will also provide coverage from NBA All-Star and the NBA Finals.

The regular season will feature 45 games that will air in primetime in Europe, the Middle East and Africa (EMEA) as part of “NBA Saturdays and NBA Sundays presented by NBA 2K23.”

NBA games and programming are available in 214 countries and territories in more than 50 languages.

centralvalleyvoicehttps://centralvalleyvoice.com
Felicia Roberts took an idea gathered a few people to reached into a minority community to highlight the positive, using a minority newspaper the Central Valley Voice. Roberts was joined by her sisters Carolyn Williams, Alleashia Thomas, niece Hermonie Lynn Williams, nephew Ron Williams, cousin Jerald Lester, Jay Slaffey, Greg Savage, Tim Daniels and the late J Denise Fontaine. Each individual played an important role in the birth of the newspapers. Since, then many have stood strong behind the success of the newspapers and its goal to fill a void in the Central Valley community. The Central Valley Voice published their 1st issue in November 1991. Its purposed was to highlight the achievements of minorities in the Central Valley. The Voice focuses on the accomplishments of African Americans and Hispanics giving young people role models while diminishing the stereotypical pictures of gangs, crime and violence that permeate the minority communities. Since 1991, the Central Valley Voice has provided an important voice for the minority community throughout the Madera, Merced. Stanislaus and San Joaquin counties.
RELATED ARTICLES
State

Through Ads and Advocates, Battle Over Calif. Gambling Propositions Heat Up