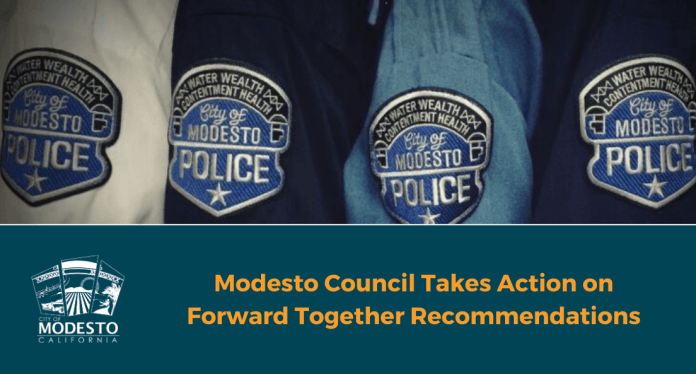 On Tuesday, December 13, 2022, the Modesto City Council approved the creation of a Community Police Review Board (CPRB) and authorized the preparation of a Request for Proposals (RFP) for an Independent Police Auditor (IPA).

The CPRB’s goals will be to increase transparency, build trust, and foster stronger relationships between Modesto Police Department and those they serve.  The Modesto Community Police Review Board has been established, under the authority of the City Council, to continue to improve police-community relationships, expand the public’s ability to provide feedback on police accountability, allow for greater civic engagement, and further increased awareness of police services and operations.  The new board will hold monthly public meetings which are anticipated to begin in May 2023 once the recruitment and appointment processes have been completed.

The CPRB will review the Independent Police Auditor’s annual report and analysis of critical incidents, receive timely notifications of major incidents, review police practices and policies, and serve as an advisory body.  The CPRB will be comprised of nine City of Modesto residents who represent the diverse community we serve.

The role of the IPA will be to offer an independent assessment of the police practices, procedures, and responses to critical incidents, uses of force, and misconduct investigations. The IPA will issue periodic reports that describe this assessment and offer recommendations for systemic improvements.  The IPA will serve as a police practices adviser to the CPRB and will provide training and work closely with the board to receive community feedback and complaints regarding the Modesto Police Department.

The creation of the CPRB and IPA is the culmination of the efforts and final recommendations of the Forward Together Working Group which was initiated during the summer of 2021. The Forward Together Initiative was catalyzed as a response to calls for police reform intensifying across the country and at our local level.

Applications for the Board will be available in early January 2023.

(MODESTO) – The Modesto Chamber of Commerce – the city’s largest business group – has endorsed Assemblymember Adam C. Gray (D-Merced) in his bid to represent the people of California’s 13th Congressional District.

“I’m proud of this endorsement,” said Gray, who has served a portion of Modesto and the west side of Stanislaus County in the Assembly for the past ten years. “The Chamber is involved in the day-to-day workings of most every business in Modesto. It knows the challenges of trying to make a business work in such uncertain times when you have to deal with changing markets, supply-chain problems, drought, and even a pandemic.

“They are great allies in our goal of creating jobs and helping families prosper. I look forward to working with the Chamber to make certain our area will thrive going forward.”

Gray was able to point to specific accomplishments that have benefited the Modesto area, such as finding $1 million to fund the VOLT Institute, which works with local employers to train young adults to work as machinists and large-equipment maintenance workers to meet regional employment needs.

The Chamber recognized Gray’s essential role in protecting the region’s water. He took the lead in organizing a rally on the Capitol steps in 2018 to protest efforts by the State Water Board to commandeer vast amounts of water currently used for agriculture in Stanislaus County. The rally drew some 1,500 people, the largest in Sacramento that year. The state recently agreed on a framework for Voluntary Agreements that will ensure there is enough water for area farmers to grow food for the nation.

“Without water, our region’s economy will be ruined – just as the lives of thousands of people will be ruined,” said Gray. “This an ongoing issue. Working with the Chamber we will remain vigilant as we take this issue to the halls of Congress.”

Gray has also been at the forefront to provide funding for floodplain restoration, establishment of a medical school at UC Merced, expanded residency programs in Modesto hospitals, and more funding for schools. He worked across party lines to bring the ACE train to Modesto, which is expected to start carrying passengers to the Bay Area by 2025.

Gray, born and raised in Merced, is the only candidate who lives in the 13th District. A full list of Gray’s endorsements can be found here.