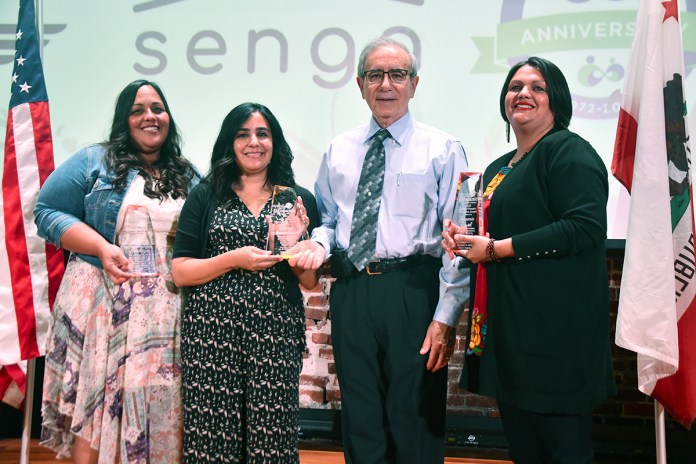 The Merced County Hispanic Chamber of Commerce held their 2022 Latina Women’s Luncheon on September 15, 2022 at the Mainzer in Merced.

Dr. Andrea Garibay is a 47 year old Hispanic Native American women raised in Merced, Ca since the age of 3 years old. She is an enrollment and Retention Specialist at Merced College. Dr. Garibay help students enroll in Merced College and help make sure they are successful with achieving their education goals. Their success is her success.

Helping people better their lives has always been Garibay passion and heart.

Yesenia Curiel is a proud bilingual Latina/Mexican. The daughter of Maria and Jose Curiel, both from Mexico. Mother Marla from Arteaga, Michoacan and father Jose from Guadalajara, Jalisco.

Yesenia was born and raised in Los Angeles, CA. A transplant to Merced via Santa Barbara, CA where she lived for 16 years staying after studying at UC Santa Barbara and Antioch University . She’s a licensed Marriage and Family Therapist and is currently a 3rd year student pursuing a PhD in Leadership and Change.

Gloria Meneses-Sandoval has lived and raised her family in the California Central Valley for forty-six years. She is proud of being a grandmother (Nana) and a great grandmother She worked as a public high school guidance counsel for eighteen years and retired seven yeas ago. With over 50 years of civic involvement, she has worked with MEChA, MAPA, Mujeres Latinas, Comite’ ProFiestas Patrias Mexicanas, Women’s Economic Agenda Project, Equal Rights, Congress and most recently with the California Central Valley Journey for Justice.

Norma C. Cardona was the guest speaker. Cardona influences, inspires and impacts through the vehicles of love, peace and joy.

She was born and raised in Santa Maria, CA located in the Central Coast where she lived in a trailer park most of her life, and later moved to and finished raising herself in the Central Valley in pursuit of higher education at UC Merced.

California Attorney General Rob Bonta made a special appearance at the Latina Women’s Luncheon.
On April 23, 2021, Rob Bonta was sworn in as the 34th Attorney General of the State of California, the first person of Filipino descent and the second Asian-American to occupy the position.

Bob Hart Square at Main and Canal streets became the center of activity. It was also the gathering point for the United Tribes of California as members started the evening with an opening prayer, followed by Native American dance.

As residents and visitors alike made their way down Main Street, they were able to interact with some 70 local vendors and community groups that lined Main Street with art, food and informational stands.

There was also a Taco Truck competition, and the People’s Choice Award went to El Taco Mas Sabrosito.

On Canal Street, artists from the Urbanists Collective displayed Aztec works at the Kreepy Kawaii gallery, while those looking to create their own art were able to do so as part of the Sketchbook Station. Meanwhile back on Main Street, Merced’s Eddie O. Rodriguez put on a live art demo at Little Oven Pizza.

Those who were unable to make it to the Mercado Night on May 5 will have another chance on July 7.

The downtown Mercado Night is organized by the Merced County Hispanic Chamber of Commerce, and the event welcomes residents of all ages and backgrounds. For more information on the event, residents can log onto mercedhcc.com/the-mercado/.