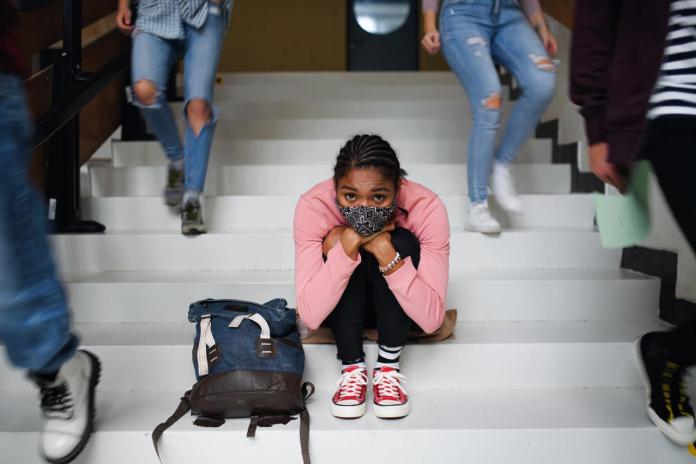 In August, The Children’s Partnership hosted a mental health panel centered around the voices of young girls and women of color. The session was organized as part of the organization’s Youth of Color initiative.

“I had never been surrounded by a group of people with the same experiences and the same struggles regarding mental health, regarding being a person of color,” said Samantha Giles.

Giles, a California teenager, is one of the Children’s Partnership’s youth panelists.

“I even got to go into a breakout room where we talked about how our parents don’t necessarily recognize our mental health struggles and I never really talked with someone else my age about my personal experience and their personal experience,” the teenager intimated.

Giles described the interactions she had with her peers as “eye opening.”

Some advocates and public health officials say the governor’s announcement serves as an appropriate policy response to what experts are calling a mental health crisis in the state. They see it as a positive step the state is taking to address the under-treated and often-overlooked challenges that youth like Giles are trying to overcome.

According to the California Health Care Foundation (CHCF), one in 14 children have experienced a mental or emotional disturbance that disrupts their day-to-day life.

Of the California adolescents who experienced major depressive episodes, 63.6 % did not receive treatment for those incidents.

Newsom touts California’s response to the national mental health crisis over that of other states.

“As other states take away resources to support kids’ mental health, California is doubling down with the most significant overhaul of our mental health system in state history,” Newsom said. “We’re investing billions of dollars to ensure every California child has better access to comprehensive mental health and substance use services.”

Some notable organizations have praised the state’s commitment to children’s and young adults’ mental health.

“The state has made some incredible and historic investments in children and youth mental health and well-being – both with the $4 billion Children and Youth Behavioral Health Initiative and with the $3 billion Community Schools Initiative,” Angela M. Vázquez, Policy Director at the Children’s Partnership, stated.

However, Vázquez raised concerns about many of these funds being one-time investments that might not fully address the needs of children of color.

Vázquez’s concerns, which mirror those of several mental health advocates in communities of color, extend to Newsom’s pledge to add 40,000 more mental health workers to California.

“Still, the reality is that the clinical workforce is and will likely remain for some time largely White and middle-class – not at all reflective of the diversity of our state’s children,” Vázquez stated.

The Children’s Partnership is currently working on a solution to the existing inequity that the organization says involves peer-to-peer interactions.

“Youth of color from The Children’s Partnership’s own youth policy council, the Hope, Healing, and Health Collective shared that greater investments in peer-to-peer programs would improve the opportunities for youth of color to connect and heal with members of their own communities and identities,” Vázquez stated. “Peer support is an essential evidence-based strategy for young people’s mental health that has the potential to build interest and foundational professional skills that lead to future opportunities for mental health career paths for more students of color.”

Contributing to the state’s youth mental health crisis are other factors like the COVID-19 pandemic, experts say.

According to research published by the Journal of Racial and Ethnic Health Disparities, the state of mental health among Black people worsened during the COVID-19 pandemic with anxiety and depression being the main issues.

“These recent events have layered on additional psychological and emotional stress on children and youth of color, particularly Black youth,” Vázquez stated “In considering what serves young people well, it is imperative that we address the systemic barriers that have contributed to historic mental health disparities in youth, and develop innovative strategies, leaving space for healing outside of and in tandem with the traditional mental health system.”

The CHCF found that Black people had the hardest time amongst all other ethnic groups finding a doctor, especially a specialist.

In 2019, Black children in California were the most likely to experience serious emotional disturbances amongst children of all other racial groups at a rate of nearly 8%.

From 2017 to 2019, roughly 30% of Black 7th graders were projected to have experienced feelings of depression or depressive episodes.

These trends are not just documented among today’s Black children. African American adults are reported to have experienced more adverse childhood experiences that negatively impact their mental health more than any other ethnic group that self-reported, according to the CHCF.

The governor says the legislation will “better define the role of school counselors.”

But Vázquez has some reservations about that bill, too. She feels it does not fully address the mental health needs of all of the state’s children.

“One thing that AB 2508 does not address is the urgent need for greater investments in California’s youngest learners’ mental health – children ages 0-5,” Vázquez stated. “The state needs to invest significantly more resources in community-based infant and early childhood mental health services, such as early childhood mental health consultations – an evidence-based model that reduces the number of preschool suspensions and expulsions, an issue that has significant disproportionate impacts on young Black children.”

centralvalleyvoicehttps://centralvalleyvoice.com
Felicia Roberts took an idea gathered a few people to reached into a minority community to highlight the positive, using a minority newspaper the Central Valley Voice. Roberts was joined by her sisters Carolyn Williams, Alleashia Thomas, niece Hermonie Lynn Williams, nephew Ron Williams, cousin Jerald Lester, Jay Slaffey, Greg Savage, Tim Daniels and the late J Denise Fontaine. Each individual played an important role in the birth of the newspapers. Since, then many have stood strong behind the success of the newspapers and its goal to fill a void in the Central Valley community. The Central Valley Voice published their 1st issue in November 1991. Its purposed was to highlight the achievements of minorities in the Central Valley. The Voice focuses on the accomplishments of African Americans and Hispanics giving young people role models while diminishing the stereotypical pictures of gangs, crime and violence that permeate the minority communities. Since 1991, the Central Valley Voice has provided an important voice for the minority community throughout the Madera, Merced. Stanislaus and San Joaquin counties.
RELATED ARTICLES
Health