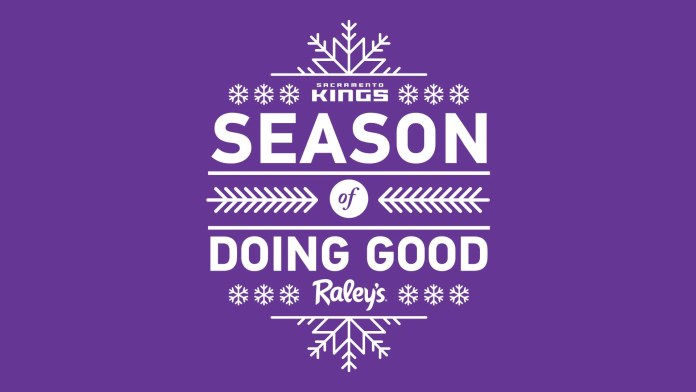 The Sacramento Kings announced activations for the 21st Annual Season of Doing Good, presented by Raley’s. This holiday season, the Kings and Raley’s will work together to invest in the community and spread holiday cheer with a multitude of festive events.

“The holidays are a special time of year when the Sacramento Kings spread extra joy and give back to the community,” said Sacramento Kings Chief Operating Officer Matina Kolokotronis. “We look forward to joining our partner Raley’s to help local families in need this holiday season.”

“Raley’s is proud to present the 21st Annual Season of Doing Good alongside the Sacramento Kings,” said Raley’s Executive Director of Community Impact and Public Affairs Chelsea Minor. “Enriching the lives of our community members is a top priority for Raley’s during the holiday season and all year long.”

The season will tip-off on November 16 with the annual Eat Like a King holiday-themed feast hosted at Golden 1 Center. The Sacramento Kings and Stockton Kings players and coaches will serve dinner and eat with over 200 youth and their families from underserved areas of Sacramento. The event will also include interactive games, a DJ, performances by the 916 Crew, a hot chocolate bar and a photo booth.

The team will then host community members for a ride on the California State Railroad Museum Foundation’s Polar Express on November 22. This holiday favorite tradition will include a stop at the North Pole, hot chocolate and cookies, with a special visit from both Slamson and Santa. Each participant will receive a gift bag with a co-branded ornament and Kings blanket. In addition, all participants will be treated to a dinner at a local restaurant following the train ride.

On November 30, as the Kings take on the Indiana Pacers, the team will host a Toy Drive with Les Schwab. The first 200 fans who bring a toy valued at $20 or more will receive two tickets to a future Kings home game.

On December 12, the Kings will partner with SMUD to host a Coat Drive at Cal Expo to benefit Mustard Seed patrons.

Then on December 13, the Kings will host an all-team volunteer opportunity, Purple Bag Project with Crown Royal.

On December 20, the Kings and Raley’s will partner with Delta Dental to bring holiday cheer and treat local seniors to activities, seasonal decorations and a warm holiday meal.

For media interested in covering Season of Doing Good activities, additional details will be sent in advance of the individual events.

All Season of Doing Good event benefactors and audiences are predetermined and selected in collaboration with Raley’s, local nonprofit partners and community organizations.

For more information on the Season of Doing Good, visit Kings.com/Community.

“We are thrilled to partner with Curtis and bring Sire Spirits to Golden 1 Center for our fans and guests to enjoy,” said Sacramento Kings Owner and Chairman Vivek Ranadivé. “This partnership continues the Kings commitment to supporting diverse entrepreneurs and aligns our shared passion for providing youth with the tools and opportunities they need to succeed. I am excited to work together to support the Sacramento community.”

“I did this deal after meeting with Vivek Ranadivé and learning how he and the entire Kings organization genuinely shares my philosophy of promoting conscious capitalism,” said Curtis “50 Cent” Jackson. “I very much look forward to meeting the Kings fans and expanding the reach of my G-Unity Foundation and spirits brands in and around the city of Sacramento.”

As part of this partnership, Jackson’s G-Unity Foundation will team up with the Sacramento Kings Foundation to deeply invest in Sacramento youth throughout the season, including providing scholarships as part of the team’s mentorship efforts. Founded by Jackson in 2003, the G-Unity Foundation supports programs that foster social and leadership skills in young people living in cities nationwide. Later this week, the two foundations will host a dinner for Kings and Queen Rise Co-Ed Youth Sports and Mentoring League players and coaches featuring a conversation between Jackson and Kings TV Play-by-Play Announcer and Host of Kings Pregame and Postgame Live Kyle Draper focused on Jackson’s career path and the G Unity Foundation. The event will also include a performance by the 916 Crew, games and giveaways for the youth.

During the season, Jackson plans to host high school students for a Kings game in an exclusive suite, participate in a sweepstakes for a road trip meet and greet and take part in an episode of Beyond the Paint, a Kings series that explores the cross section of sports, culture and social issues to share varying perspectives and experiences. Jackson will also work with the Sacramento Kings to create live entertainment experiences at Golden 1 Center.

Earlier this month, Jackson met with Kings rookies and took in a game with Ranadivé during Summer League in Las Vegas. View a video of “50 Cent” and his time with the team HERE.

Jackson was represented in this deal by his General Counsel Stephen J. Savva and Mark Passler of Akerman, LLP.

centralvalleyvoicehttps://centralvalleyvoice.com
Felicia Roberts took an idea gathered a few people to reached into a minority community to highlight the positive, using a minority newspaper the Central Valley Voice. Roberts was joined by her sisters Carolyn Williams, Alleashia Thomas, niece Hermonie Lynn Williams, nephew Ron Williams, cousin Jerald Lester, Jay Slaffey, Greg Savage, Tim Daniels and the late J Denise Fontaine. Each individual played an important role in the birth of the newspapers. Since, then many have stood strong behind the success of the newspapers and its goal to fill a void in the Central Valley community. The Central Valley Voice published their 1st issue in November 1991. Its purposed was to highlight the achievements of minorities in the Central Valley. The Voice focuses on the accomplishments of African Americans and Hispanics giving young people role models while diminishing the stereotypical pictures of gangs, crime and violence that permeate the minority communities. Since 1991, the Central Valley Voice has provided an important voice for the minority community throughout the Madera, Merced. Stanislaus and San Joaquin counties.
RELATED ARTICLES
Sports